So, why did I, a man happily getting his military kicks from couch sniping on PS3 and trying to follow his two Army brothers war stories suddenly jump full force into a tabletop wargame with collectable miniatures? Allow me to explain.

It has to do with recent involvement with a fantasy board game called HeroQuest, and in a strange way, this isn't the first time HeroQuest has prodded me in this direction.

HeroQuest was a pretty cool board game put out by Milton Bradley back in the 80's. It had a sweet commercial which grabbed my imagination and one of my older brothers and I just had to get it for Christmas.

We happily received the game and spent many hours playing. In retrospect, part of what drew me in was certainly the little figures. Another older brother was our household Dungeons & Dragons aficionado. He had started to collect miniatures along side the newer Advanced Dungeons & Dragons game and had a pretty cool box set that he was just starting to learn how to paint (using his Testors automobile model paints, no doubt). 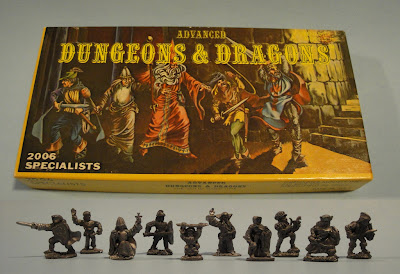 All rights reserved by shornk

These little statues facinated me. Dungeons & Dragons? Far to complicated for me. Too much paper and the stats implied math. No thank you. I was 11 at the time.

But HeroQuest was far more basic. The dice had symbols on them, the board kept movement grounded in reality, and the "quests" each lasted about an hour. 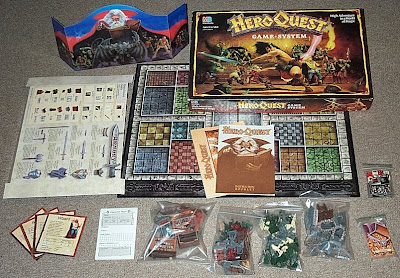 Eventually, HeroQuest released expansion packs. They were marketing it as a game system and not just a self contained board game after all. Naturally My brother and I wanted to play the new quests, which also had new monsters and miniatures to control. I'm not certain we collected all four expansions, but I'm certain on three. Regardless, what came inside one of them ended up being more important to the story and it wasn't a new map, monster, or hero...it was an advertisement.

It was a little foldable two sided color glossy. Highlighting a few different games; Advanced HeroQuest, I believe BattleMasters, a Magazine called White Dwarf, and a picture of the coolest looking fully painted miniature, I'd ever seen. 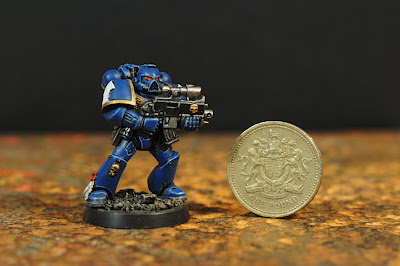 All rights reserved by Steve Greaves

A Space Marine, the caption named it.

Wait. Hold on a second. They make miniatures like this? I can play something as this guy? A machine gun? In space? Let me dig a little deeper, or at least read more of this advertisement. How come I haven't seen commercials for this sort of game, this Warhammer 40,000 game?

Well because the games on the advertisement were not from Milton Bradley, but from a UK company they'd partnered with for HeroQuest named Games Workshop.

I started digging into it, which was difficult in that the internet wasn't around. To be honest, I can't remember how I obtained the rulebook, or even knew what to look for. I have to assume that it was my Mother who suggested I try to learn more at Cum-Craft in Bay City, MI. From there I ordered the Rogue Trader Warhammer 40,000 rule book. 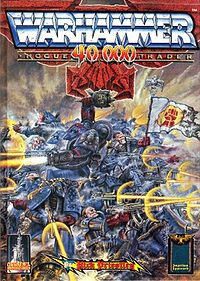 I learned that this was no board game, or even role playing game. This was a complete table top wargame. I'd seen nothing like it. Not only would you have that one super cool space marine figure, he was part of a squad of 10, which was part of a larger force, taking on an opposing force of Eldar (space elves), Orks, etc...

The game was (and still is) pretty cool and the visuals that are possible through the building of terrain is amazing. So I set off to play Warhammer.

I encountered a few problems though, that ultimately derailed me. Laziness was only part of the story. Cost was a factor, and one that I guess has only gotten worse. That's not to say it's undoable, but when I finally started getting my hands on miniatures between the age of 13-18 I didn't have a lot of money. The Warhammer rule set can be used to play games of all sizes, but truthfully, you want a pretty significant army on both sides. Additionally, while I had friends who were interested, know one I knew was going to learn the rules or invest their time and money in collecting and painting. On top of that, I had no clue on how to create affordable terrain. YouTube wasn't the resource it is today, so it was something that I put off, thinking that I'd get to the terrain after painting the army. I later found that I'd rather have legitimate terrain in place with primed models that to have beautifully painted armies fighting for dominance of a kitchen table with a bedsheet over some books, empty coffee cans for buildings, and balled up socks for a forrest.

I only ever played one or two real games before I just sort of gave up, focused on having fun in college, and left my models to collect dust.

In my early twenties the bug bit me again and I finished painting a squad, but it was short lived because even with having a decent army, (2x Space Marine Squads [total of 20 marines] 1x Terminator Squad [5 Terminator Marines] 1x Dreadnaught [1 bad ass mech/tank type marine] and a Lemun Russ Tank) I had no opposing army. The thought of investing in an adversarial army and painting both became overwhelming and I walked away.

I never got rid of the miniatures and recently cleaned them up and properly stored them as you can see below. 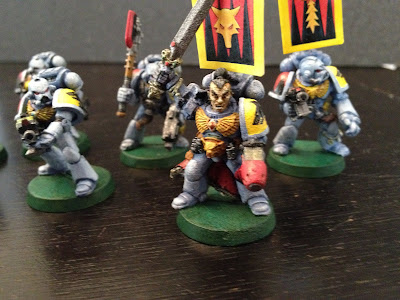 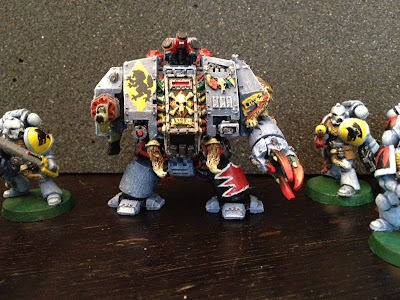 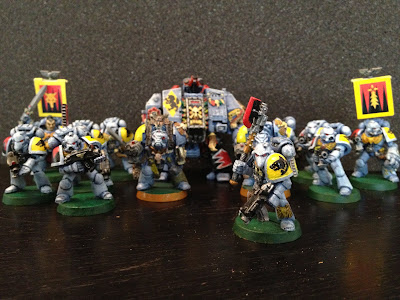 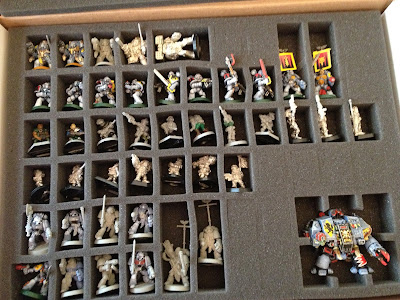 Fast forward 10 years or so.

Now living in Boston, I'm on a weekend road trip/bender with a buddy. Somehow HeroQuest comes up in conversation. 'The games we played when we were younger' sort of thing. He says, "You know, I have a full HeroQuest game back home. Pretty sure we never lost any pieces and it's mint. We should play some HeroQuest this winter."

I think to myself that this would be cool, but really, when will I want to play HeroQuest and who can we get to play with us? At the time Battlefield 3 and Uncharted were both on the near horizon and was pretty certain that my winter gaming time was going to be spent on the PS3. However he made it happen. Grabbed two more buddies, we coordinated on nights were the girlfriends and wives would be having girls night watching The Bachelor, and we whipped out the HeroQuest.

We had a group of 4 playing so one of us would take on double duty (1 player plays as "Zargon", the enemy who controls all monsters and the board and is in charge of running the Quests. The other 3 of us play 4 character classes, a Barbarian, Wizard, Dwarf, and Elf).

We were surprised at how much fun it could be for four grown men to play a kids board game. The beer helps, but let's not kid ourselves, it's just fun to sit around a table and roll the dice instead of being plugged into the tv and playing online. We strategize, live and die based on shields or skulls rolling up on the dice. It's a bunch of fun. Plus, there's the miniatures... 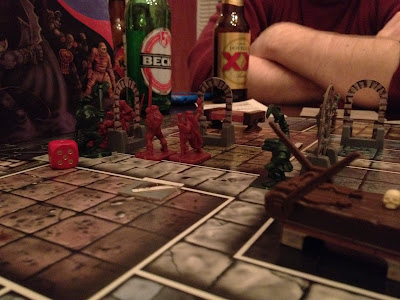 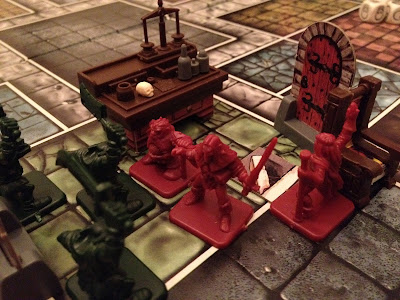 While playing, we start to talk about the game, the miniatures, and the fact it was a partnership between Milton Bradley and Games workshop, that it took place within the "Warhammer" universe. I told the guys about Warhammer 40K and that I had a couple of the painted miniatures buried in a closet.

I dusted the boxes off and proudly displayed them to an interested audience. The bug was back. However, a little different. I may pick 40K up again. Time will tell, but I wanted to try something different. So much of my gaming falls outside of fantasy. Battlefield Bad Company and Battlefield 3 have probably gotten the most play out of my PS3. And a few years ago I learned that the miniature world has a little something for everyone. I'd always known of tiny Napoleonic Era miniatures, but what about modern conflict miniatures? What about a modern conflict game?

There's plenty of History wargames out there, generally leading up to WWII. So I did some Googling and finally came across Force on Force. It's a very versatile game platform that, due to it's focus being on the squad characteristics rather than the minutia of each weapon and character, can easily be applied to any conflict from WWII to the present. 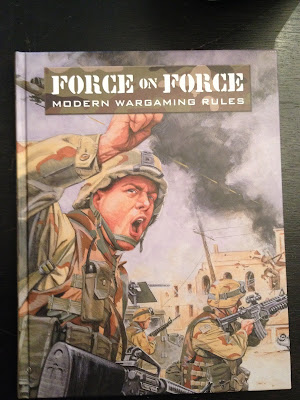 So arming myself with the rule book, a love of 28mm miniatures, and the internet as a "How-To" Resource, I've set off to learn the game and , using this blog, share the progress with all of you who may be interested.