Force on Force: A Few Blocks of Hell (2nd Play Through) 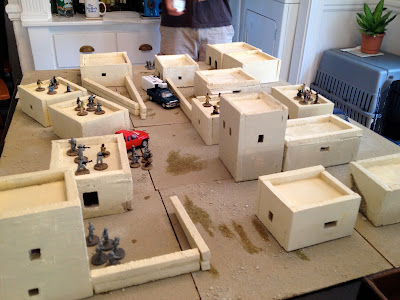 After a few weeks and a re-read of the rulebook, it was time to try another game of Force on Force.  I decided to do a second play through of A Few Blocks of Hell for a couple of reasons, but mainly because it's an symmetric engagement (asymmetric have slightly different rules adhered to by the opposing forces...to learn the game we might as well have both sides be playing by the same rules), there are no vehicles (again, that would add some complexity that I don't want to deal with, and besides, I have no vehicle models!), and most importantly I have just enough miniatures to run this game (which luckily doesn't have any reinforcements!) and that's using some US Recon Marines playing the part two enemy fire teams.

Read on to see some snapshots of the upgraded table (though I could still use a few more buildings) and notes on what I learned or changes made on the second attempt at this Force on Force beginners scenario. 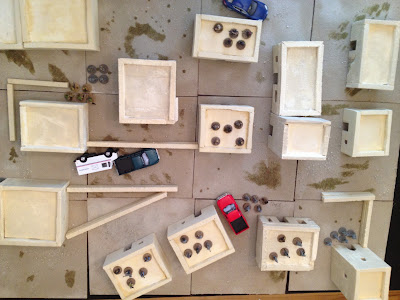 I've been trying to collect some civilian vehicles and the little cast iron cars and trucks at pharmacies and gas stations just about fit the bill and are relatively cost effective.  They're a little big for the scale, but I've read online elsewhere that being a slave to absolute scale will drive you nuts.  Even the miniatures themselves tend to have exaggerated hands and heads so I'm not too concerned about it.  That said, if anyone finds some 1:50 vehicles in all sorts of shapes and sizes that don't cost a fortune, let me know. 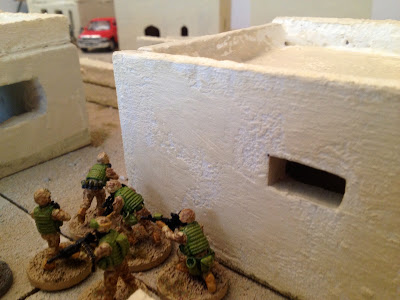 One of the major changes I implemented in this game was doubling movement and ranges.  As mentioned in my first post on A Few Blocks of Hell, I was afraid to double the movement, even though my miniatures we nearly twice the scale as the rulebook sets as standard.  I was afraid that having my solders able able to bound around at up to 24" on a single move, essentially half the length of my table, would be too much, too unrealistic, and ruin the game.

However, in practice it became apparent that, in a non-firefight, these guys should absolutely be able to cover such distances.  Also that tactically, they would rarely have the opportunity or motive to run circles around the area of operations anyway. 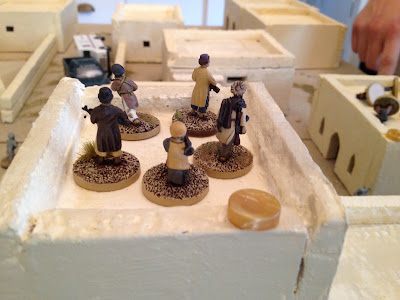 I also started using tokens in this game, and not just for wounds.  The gold token above is indicating that this unit has engaged in one round of fire, effectively reducing their next round of fire by one die.  With each unit having the potential to engage in 1-6 or more firefights, It made sense to keep track of it. 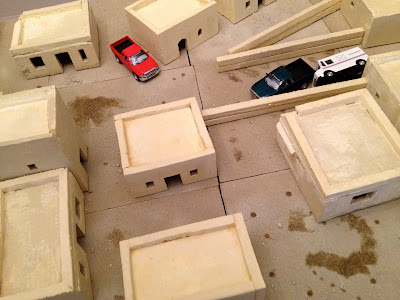 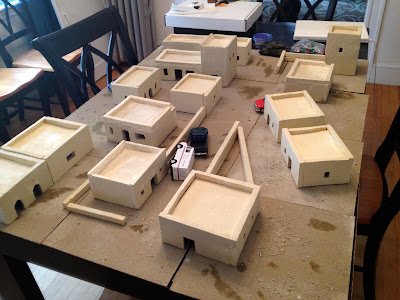 Similarly to the last game, most of the action took place on the left side of the table.  I suppose the Marines are trying to take the most direct route to their objectives (two buildings in the back left) and also don't want to get caught on the main road where they can easily be fired upon on both sides.

This one ended on a dumb note.  I suppose I could have won (playing as the Taliban...this scenario was written to take place in Iraq, however I've transfered it to the theater of my choice) but I decided I wanted to try out the hand-to-hand combat game play thus wiping out an entire fire team of mine and handing over the objectives and points to my opponent.  Oh well.  The game was good fun and I'm eager to learn more rules and try out some more scenarios.