The Last of Us: Release Impressions (Single Player)

Hey everybody, there isn't just one AAA game this year revolving around a gun-for-hire and a job that ends up being a girl in need of some saving.  Naughty Dog, the developers behind the Uncharted series on PS3 have bravely chosen to release a post-PS4-announced, new IP that proves that they can still squeeze some magic out of current-gen hardware.

In doing so, they've set upon the gaming community a title that is a clear evolution of the adventure game genre and one of the highest rated games not just of this year, but of this console generation.

Story
Night of the Living Dead, The Walking Dead, Day of the Dead, Left 4 Dead, Shaun of the Dead...the zombie apocalypse genre is.....well, alive and well.  The Last of Us takes a few purposeful liberties to set their story apart.  One departure being that the living dead, here are not "un-dead" but just "mostly dead"...in that they're dying from a fungal infection that "zombifys" them through various stages until they become a mushroom hug pillow.  Another being that the story, as the title suggests, focuses on Us, rather than the dead being the main attraction.

Just as with the Uncharted stories, Naughty Dog found some tidbit of reality to spin their fantastical story off of.  In this case, the pandemic of which the story takes place twenty years after it caused widespread collapse of society as we know it, is based of a fun little zombie fungus found in nature.  If you haven't seen the BBC clip used as a teaser to the game a few years back, you can here.  But don't go into this game thinking it's Nathan Drake takes on a George A. Romero scenario.  The popcorn feel of Uncharted is nowhere to be found.  This is a darker, more mature, more hopeless setting than Naughty Dog has ever put before us. 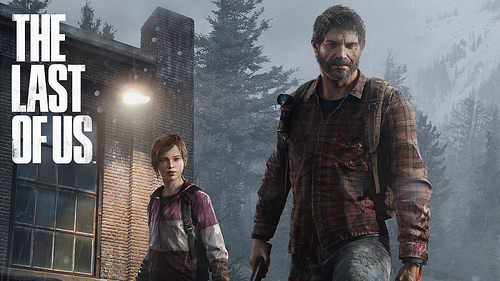 You play as Joel, a hardened survivor, who's taken to smuggling and under-world odd jobs among the population kept "safe" within highly militarized Quarantine Zones.  Fate would have it that he's tasked with smuggling a unique cargo out of Boston's QZ.  This unique cargo?  Ellie, a 14 year old girl who's earliest memories would have been at least five years after society collapsed.  This is the only world she's ever known and has until now, never set foot outside the confines of these quarantined fortresses.

Unexpected events occur which place Joel and Ellie on a cross country trip, trying to get her to a fringe group, called the Fireflies who are operating outside of what's left of the government which itself is nothing more than a militant oppressive entity.

The setting of The Last of Us, this post-pandemic America, where survival is brutal, difficult, and precious is very well fleshed out in the story and maintains a desperate tone throughout the game.

The story of Joel and Ellie itself doesn't break any new ground, but it's certainly a video game version of a "page-turner".  Yes it's predictable, but it's told so well you'll want to play through the game with the same urgency of watching your favorite TV series, whether that be through appointment viewing or binging on a streaming service.

Gameplay
I wasn't surprised at how familiar the controls were when compared to the Uncharted series, but was surprised when realizing that they're a pretty significant evolution to those controls.  Whereas Nathan Drake is focused on cover, shooting, running, jumping, and climbing, Joel more grounded in reality and his movements and actions are very contextual.  For example, he won't jump unless there is a contextual reason to do so.

They've also done an overhaul of the cover system which is pretty impressive.  Pressing the circle button on the controller doesn't snap him to the nearest cover, it simply puts him into a crouched, more stealthy position to move in.  Then they've imparted what I could describe as a natural magnetism to walls and cover.  It works real well.  Walk up to cover while crouched and you'll stick to it, moving to the edge and he'll naturally stop right at the corner.  But feel free to pull away in any direction and he will.  You're not glued to it. 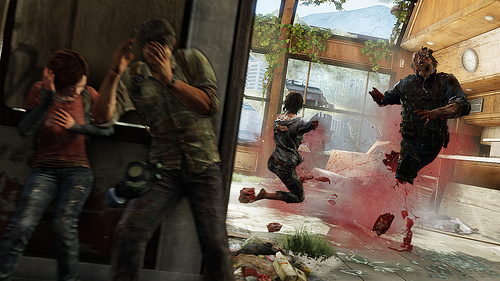 Aiming, shooting, and throwing items such as Molotovs, bricks, and more are generally the same, with the exception of no blind firing your gun.  You'll need to aim, which makes sense considering ammo is treated as a premium in this game.  You'll need to make every shot count as bullets are rare to come by. 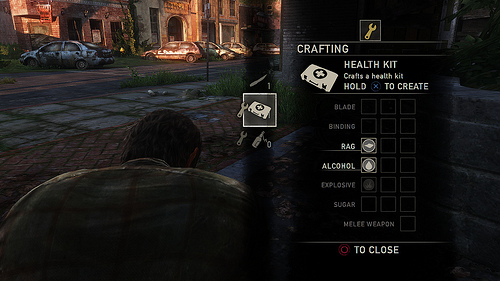 Naughty Dog has done a real good job implementing scavenging and crafting into the game.  Recent games I've played like Far Cry 3 and Bioshock Infinite have you scouring your environment for loot, but as I mentioned in my write up on the latter, it can become a search for a flashing item, rather than exploring the actual environment. The Last of Us, while still having the near-universal "glare" on useful items, has kept them small enough that I do feel like I'm searching the drawers and cabinets of a room, taking in the detail of my environment.  Also starting to look for shapes that make sense too.  Like a plastic bottle in a bathroom or a glass one in a bar for alcohol.  Also you'll start to identify a bag of fertilizer for explosives for example.  It's well put together.  As far as crafting goes, they keep you "in-game", where you find a good spot to toss open your backpack to craft a Molotov or a first aid kit and this approach works quite well.  It feels less like your navigating menus and more like making real choices with real consequences.  This carries over to your weapon selection as well.  If you run out of the three bullets in your revolver, don't plan on a quick button tap to bring out your 9mm.  You'll need to dig into your bag to get it.

Encounters with hostiles, whether human or not, can be handled in many ways and you are encouraged to thoughtfully approach the situation based on the type of enemy and the resources you have on hand.  Stealth and cover are key, even after enemies being alerted to your presence. 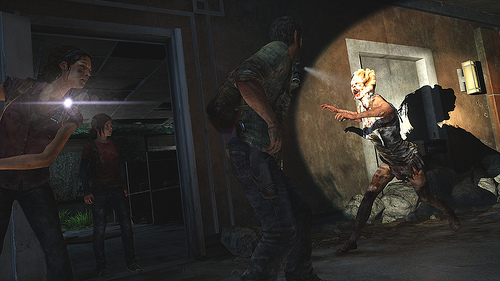 The infected enemies you encounter require different tactics based on the stage of their infection.  Early stage infected are called "runners".  They have poor eyesight and in many cases will simply be standing in a room almost crying and shaking as if afflicted with a fever.  When provoked, however, they'll come at you full tilt.  "Stalkers" are much like runners but themselves can be a bit more methodical in how they attack you and will search you out.  "Clickers" are the creepiest of all.  They're heads and faces are overgrown with fungus and rely on a clicking noise for echolocation.  They're bodies convulse and contort as they lumber around.  When provoked, they'll charge at a pretty good pace.  "Bloaters" are what you might consider the "heavy" of the bunch.  They're much harder to kill, take a lot of damage, and throw spores at you.  Personally, they feel far more like a video game trope than most everything else in the game, so I kind of feel like they're a rare mis-step.

Combat is desperate and brutal.  Ammunition is scarce (though not too scarce) so you'll use it sparingly.  Eventually you'll want to do what you can in hand to hand combat which involves graphic choke-outs, head stomps, face slams to counter tops, and hatchets to the face.  Like I said, it's desperate and brutal...and both of those aspects are done very, very well. 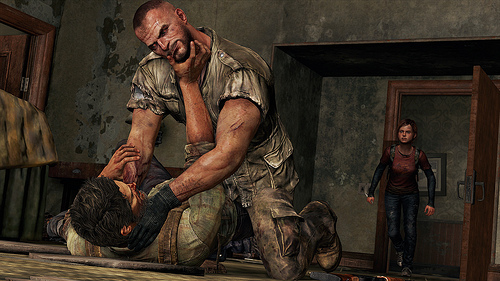 While you're occasionally separated from Ellie, you're generally there together and it's the in-gmae banter where you see their relationship develop.  The two characters being together offer up some platforming puzzles reminiscent of the game Ico.  Occasionally, Ellie will also offer up some help when Joel is overwhelmed by throwing a brick or lunging on an enemies back and making a few perferations with her switchblade.

Though you're Ellie's guardian throughout the game, the missions are not really "escort missions" she's there as part of the story more than for the benefit of any game mechanic.  That said, the intensity of the gameplay is sometimes broken by the fact that enemy AI is sometimes unaware of her existence.  More than once in the game, I'd be lurking ever so carefully through a situation, hiding from enemies sight, and she'd just stroll through the open.  It didn't alert the enemies, thus not ruining my plan, but it's one of the few times that take you out of the moment and remind you that this is still a video game and the non-player-characters have intelligence on par with a fruit fly.

Presentation
The Last of Us is easily one of the best looking games I've played on the PS3.  Environmental effects may be lacking, but the draw distance, art direction, and level design are all top notch. 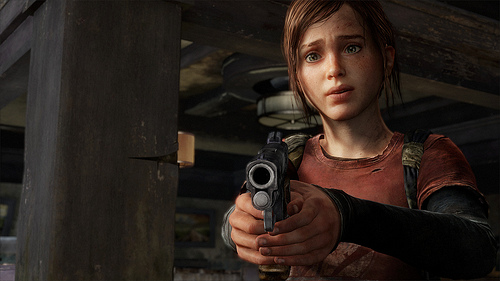 Character models are fantastic, Ellie in particular, and the way that she conveys emotions in her eyes is really impressive.  They've outdone themselves.  Joel's face can seem a little wooden, but the voice acting and motion capture of all the principle characters more than makes up for it.  The dialog is wonderfully delivered, and you certainly do start caring for these two desperate souls making their way across what is a hopeless world.  I found myself even turning around after a jump to make sure Ellie made it. 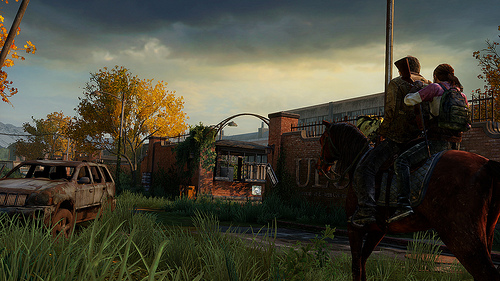 The environments are beautifully draped in nature, reclaiming the industrialized world, and buildings are both modern and familiar while being mysterious and crumbling to ruin.  Naughty Dog did a fantastic job and the level of polish given to the game is admirable.  They set the presentation bar high in Uncharted 2 and they've upped it again.

Final Thoughts
Naughty Dog has solidified it's reputation among gamers as a studio that so not only pays equal attention to story, gameplay, and presentation, but excels in each of those elements.  The Last of Us does nothing but further exemplify that statement.  If a mash up of The Walking Dead, Children of Men, and The Road seems like it would be a game your interested in, then trust me, you'd be interested in The Last of Us.

The Last of Us is developed by Naughty Dog, Published by Sony Computer Entertainment.