A friend came over and allowed for the chance to do a new (to us) scenario for Force on Force.

Some rules were of course forgotten, misinterpreted, or avoided, but it was actually a fantastic game for getting a hang of the basics and was quite fun.  I think the rules are starting to really sink in, and where things were still foggy, we were able to come to agreement pretty easily.

The scenario was called Contracting Trouble and is actually one of Ambush Alley's/Force on Force's more popular scenarios.  A quick Google search will take you to a number of "After Action Reports" on this game.  After glancing through a few of those AAR's you're see a trend.  The Marines are fucked...

Disclaimer: I'm far from being finished with painting miniatures, buildings, vehicles, etc...but whatever.  I'm only a year into this hobby and should have many more ahead of me.  I was actually surprised with how many miniatures I actually do have completed, that along with several partially painted ones, made this game look pretty well fleshed out.

Scenario:  An SUV occupied by two U.S. civilian contractors broke down in the wrong side of town.  It all began with some antagonistic rock throwing from mischievous youths, but when the contractors drew arms in an attempt to discourage further hostilities, the situation quickly escalated.  The rock throwing increased and shortly thereafter a molotov cocktail burst flames across the back of their vehicle.

Only minutes had passed when the contractors found themselves taking pot shot fire from local insurgents.  Their warning and suppression fire had subdued the locals for about 15 minutes, but time and ammunition was already running short.  Areal surveillance showed more mobs (presumably hostile) quickly closing in on the wrecked SUV.  Two fire teams from a near by squad of US Marines were sent over to extract the contractors as quickly as possible.

Insurgents 14, mostly small arms, though a few with RPGs.  Reinforcements randomly determined at the end of each turn.

The USMC fire teams approached the situation from the south.  Fire team 2 quickly improvised a covered position allowing them a clear view of the street leading to the contractors. 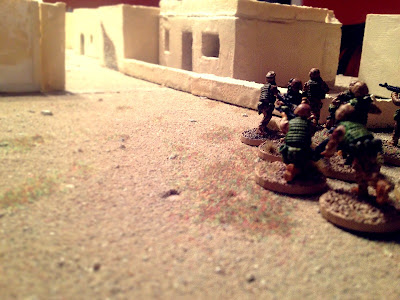 They provided overwatch cover as fire team two rapidly moved to the courtyard of a nearby dwelling. 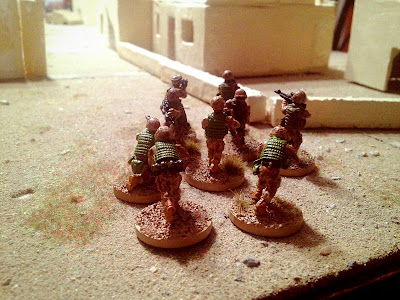 At the sight of US military personel, a few insurgents thought twice about opening fire on them and held back in their roof top positions. 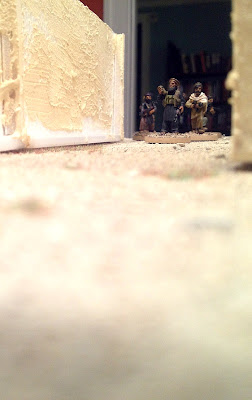 Meanwhile, local leaders banded together with the loosely coalesced bands of insurgents and began formulating a strategy to eliminate these unwelcome interlopers.

Fireteam 1, safely in cover behind the high courtyard walls unfortunately succumbs to exhaustion from the double time run to the mission.  Not fully understanding the seriousness of the growing situation, the squad leader orders them to take a quick hydration break before moving forward.

Fire team 2, however, is flabbergasted at the sight of this, as their view of the scene confirms that the insurgents are indeed closing in on the contractors and building a dangerous gauntlet by occupying more postions on either side of the street.  To make matters worse, their support gunner notices that his SAW isn't operating properly and he may need to rely only on his side arm. 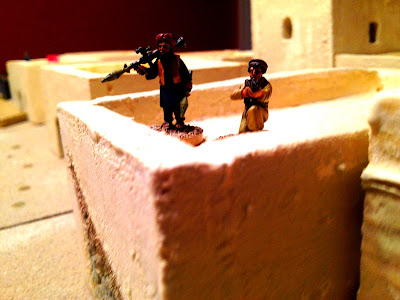 A local with an RPG emerges from a rooftop position to fire almost directly down on Fire Team 1, but quickly seeing Fire Team 2 lining up on his position again hunkers down before he's able to fire a shot. 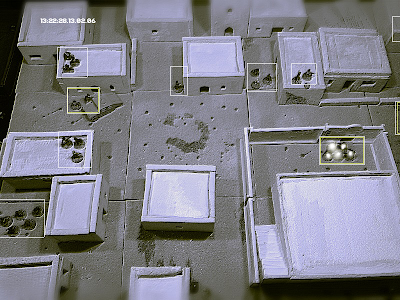 Fire team 2 informs Fire Team 1 that time is running short and that they can visibly confirm enemies building up around the stranded contractors, who've at this point exhausted all ammunition.  Fire Team 1 decides it will dash across to the next alley way over, assaulting a small band of insurgents, while Team 2 continues to leverage it's overwatch position.  As they dart across the street, the same local with the RPG stands to fire and is quickly taken out by Fire Team 2.  When the small band of insurgents see Fire Team 1 rush at them, the turn tail and run away. 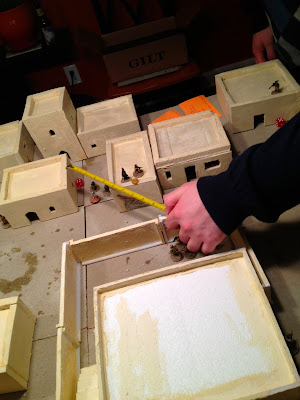 Sadly, at this point, the insurgency has taken on formidable numbers and positions surrounding the hapless contractors. 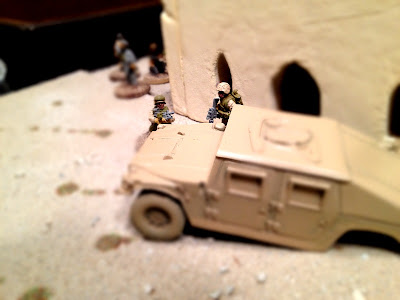 Additionally a good size band of locals with small arms has found their way to Fire Team 2 and engages. Fire Team 1, now holed up in an unoccupied building are close enough to see the fear in the contractors eyes as they look for any help possible.  They're so close, but Fire Team 1 finds itself taking fire from all directions.

A lucky shot makes it's way through an open air window and floors one of the marines.   He bleeds out within the minute and the squad leader is beginning to realize the severity of the situation.  Outside he hears rhythmic chants and taunts from 15, maybe more, armed enemies.  Fire Team 2 radios "They're closing in!  Either get in or get out.  We can cover a retreat to the south, and it looks clear, but if you're going to get those two, you have to act...NOW."

Fire Team 1 darts out of the building running to the contractors as Fire Team 2 continues covering fire at the two rooftops.  Miraculously they reach the contractors, quickly lift them to their feet.  Upon turning around, however, all they can see is chaos. 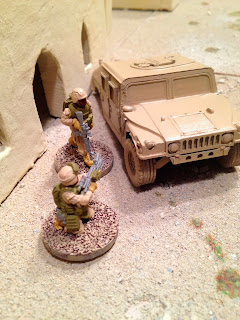 Fire Team 2, can't believe what they're seeing from afar.  This was an easy in and out, they thought.  Watch your corners, grab the civilians, march out of there and be back by dinner.  Instead, they see their Leader on the ground alone, radioing for more help hunkered between two buildings flanked by rabid locals ready to finish him off.  the rest of Fire Team 1 lying less than 10 yards of the wrecked SUV, either writhing or laying still.

Some notes on our gameplay.  I'm still working out just the right distances to use.  The 12"/24" movement which is double the standard rules designed for 15mm-20mm miniatures works well, but see my self running out of table space quite quickly.  As a matter of fact, using the "doubling" rule I would have needed to play this on a 4' x 4' table, but I had to settle with 4' x 3'.

I'm starting to think I should do a 1.5x adjustment to the standard rules, but it will just be a little more confusing for new players when explaining that Optimum Range for a D8 Troop quality is 12" and that movement is 9"/18".  But, I suppose that it isn't any more confusing than Warhammer 40K that has various movements per species or soldier type.