When working on your terrain, it makes sense to work from macro to micro, at least when getting started.  Ultimately, I would love to have garbage cans, street lights, electric lines, maybe even litter like a crumpled up newspaper blown into the corner of a courtyard.  But first things first, I want a basic playable table.  I've started by creating some basic buildings and I have a surface upon which to place those buildings.  Yes, yes we'll need more buildings (currently working on that with an even simpler method!) and we need to add some elevation our table, but let's start with...trees!

I purchased a couple trees that I've yet to base.  They look nice...but not incredible.  If you only get two "alright" looking trees for around $20 it's going to be very very pricey to play Johnny Appleseed on your table.  I knew there had to be a better way.

I ended up coming up with my own approach, which I'll share below.

Believe it or not, this isn't a popular wargaming terrain topic.  It's there to be sure, but not as easily found as others.  Plus, it's very inconsistant.  There does not seem to be a universally accepted scratch building technique for trees.  I found some inspirations in the forums of TheMiniaturesPage and in some Googled blogs, but I unfortunately have had some difficulty finding them again so I can't site them.  So I apologize that I can't send you directly those pages.

One question I had going in was what kind of wire do I need.  I found on a Palm Tree "how-to" page that Floral Wire or Craft Wire works, so I ordered some up off of Amazon, though I suspect you can also find it at your local craft store.  I opted for a relatively small amount, because I wasn't sure how thick of wire to use.  Ultimately I chose 18 gauge and so far am pleased with it.

I planned to create the tree frame with the wire, then coat it with Sculpy modeling clay, paint, and finish off with some Clump Foliage. 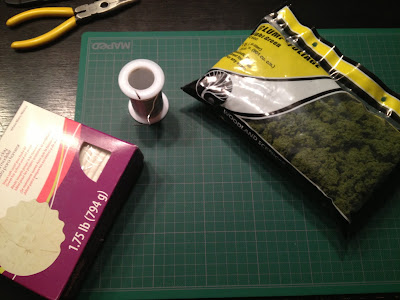 I began by cutting several lengths of wire, roughly 10", however you can and would obviously want to varie them as you would want different height trees. 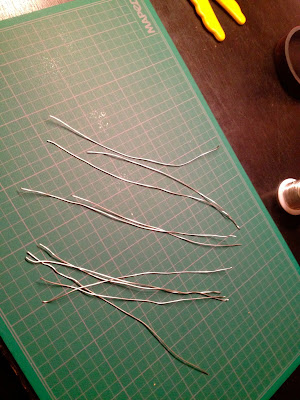 Next I'd group them in fives and twist together with a pare of pliers.  (Yes I know there's only four in that picture.  I quickly realized five or even six, works better.  I stuck with five to get the most out of the wire I had on hand). 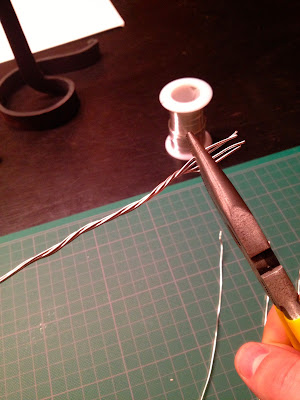 Next I bent back the roots and started "peeling back" the branches. 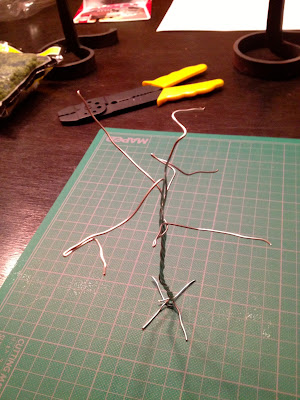 I made sure to double back on each branch at least once, pinching it tight, so as to create more limbs.  The longer your initial length of wire, the more of this you can do, so keep that in mind. 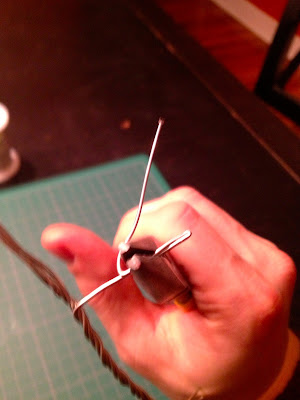 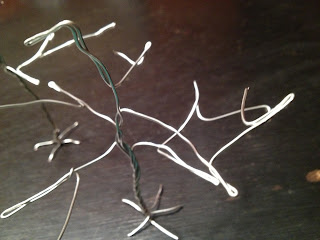 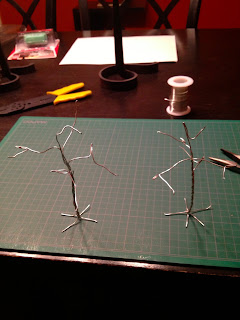 It wasn't long and I had the beginnings of a small grove. 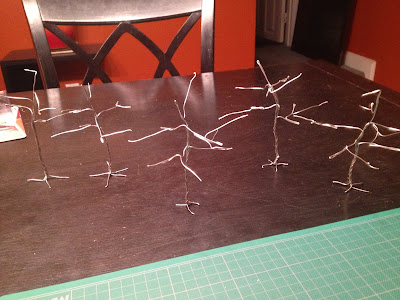 I began a frustrating process of applying Sculpy modeling clay to the wire.  This resulted in far too think of limbs for what I wanted.  I did finish one off and bake it just to double check, but it looks pretty bad. 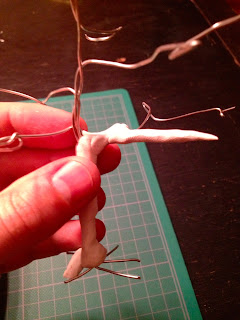 Knowing now that the Sculpy approach won't deliver on what I want, I had to come up with a new solution.  I must have read this somewhere, because masking tape immediately came to mind.  So take note...for this approach DO NOT USE SCULPY! 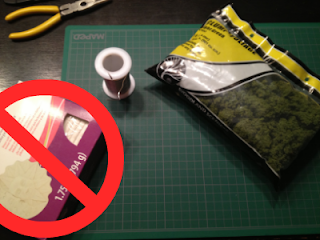 My new plan would be to coat the wire with Masking Tape, spray it with primer, and paint. 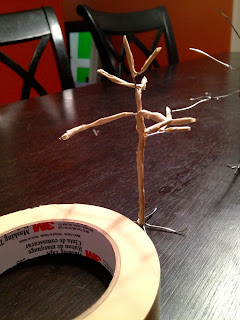 The results were immediately more in line with what I had in mind.  Notice below the fully baked Sculpy tree in the back left.  I also stopped coating my entire limb in Masking Tape. 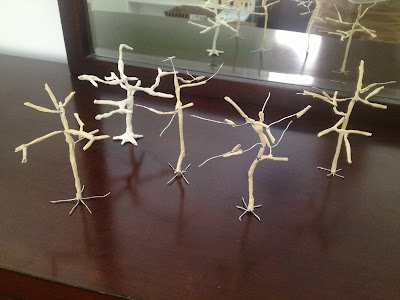 The next step will be basing the trees, another process where I'm going to improvise.  I don't have a saw to cut solid MDF bases, so we'll see what I come up with.

Email ThisBlogThis!Share to TwitterShare to FacebookShare to Pinterest
Labels: Terrain